Our friends Chris and TL were getting married in Salt Lake City.

We headed to the airport in the late morning. It was a short, uneventful flight (the hour-and-a-half SEA to SLC route is a breeze compared to the three-times-longer SEA to DTW flight that we often take) and we arrived at our hotel, the city center Hilton, at about 4:00 in the afternoon. 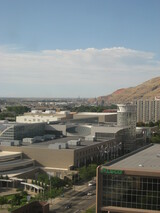 We just chilled out for a while, then walked around the block to Keys on Main. There we met Krista's friend Erica and her husband Jesse, plus their friend Doug.

We were at Keys on Main in April 2011 when we first visited Chris and TL. We had an absolute blast then. This time, unfortunately, our experience was significantly worse. It was a Thursday night and significantly emptier than it had been the first time we went. The crowd was lame. Early on there was one table with a redneck couple (I mean that in the worst possible sense) requesting country songs and another table of three hipster douchebags (again, I mean that in the worse possible way) who seemed to take pride in requesting the most obscure, long, and generally unpleasant songs possible. The musicians were happily going along with the requests.

Then it got worse - a bachelorette party showed up. At this point the musicians pretty much dropped any pretense of taking requests and started in on what I assume was their standard bachelorette party routine. We left soon after.

We headed down to the Ft. Douglas Military Museum in the morning. This turned out to be a really small museum focused on the history of the US military in Utah. It was interesting, but not particularly compelling. I thought the best part was the handful of old artillery pieces, tanks, and helicopters out behind the building. I don't think I'd recommend this museum for a casual museum-goer. 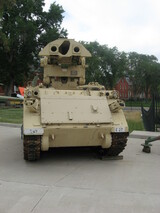 We headed back to the hotel to relax until it was time to get ready for Chris and TL's wedding. It was actually raining as we were driving to Red Butte Garden; we were a little worried about what would happen as we knew it was going to be an outdoor ceremony. The rain was tapering off as we walked into the visitor center. We milled about with several other guests for a while, until it became clear that the ceremony was going ahead. We walked through the garden to the pavilion. Several employees came out with towels and began drying off the chairs and the sun soon came out.

The ceremony got underway about a half-hour late; it was brief, which I endorse. The weather was gorgeous, given that it had been raining an hour earlier, and everything went without a hitch. 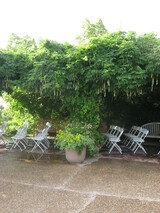 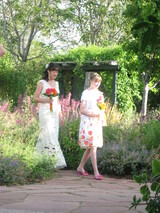 We then walked to the orangerie, where the reception was being held. The reception was great; the food was good, the band was good (although there were some technical difficulties; they blew a circuit twice before getting their power consumption down by turning off some lights), and we finally had a chance to chat a little bit with Chris and TL. We didn't stay too late, as we were both tired, but we made plans to catch up with the couple the following day.

We woke up to discover that there had been more rain overnight. We got an early start to head up to Draper to Erica and Jesse's house for some college football. We watched the Ohio State game, as everyone present (except me) was a fan of that school. I drank some beer, we ordered some pizzas, and generally had a wonderfully relaxing time. There was another brief rain and wind storm.

We left there and headed back towards Salt Lake City to get to Chris and TL's house. I had seen pictures of the view off of his back deck, but I didn't really appreciate how beautiful it was until I saw it in person. We visited for a while and made plans to meet up with Chris, TL, and his family for supper later in the day, then Krista and I headed back to the hotel.

When the time came to head out Krista wasn't feeling well, so I was on my own. We had agreed to meet at Eva, about a block from the hotel. Unfortunately it was pouring down rain (again), so I ended up waiting in the lobby until it let up.

I got to Eva soon after TL and Chris's brother Jeff. Unfortunately there was a lineup and we were told it would be about an hour wait. We milled about for a while, trying to figure out if we wanted to wait or go somewhere else, but eventually we settled on walking a half-block to Maxwell's and having a drink there. The timing worked out well; we got a call from Eva telling us that our table was ready just as we finished our drinks.

Eva was, in a word, fantastic. The service was great and the food was delicious. I think we probably tried about fifteen different small plates - everything was at least very good, some things were phenomenal. I think we had three plates of "Oink Oink Oink" and multiple plates of several other dishes. I'd go back in a heartbeat.

Then it was back to the hotel for some well-earned rest.

We took it easy at the hotel until it was time to head to the airport. We both got upgraded to first class for our flight back to Seattle. Again, the flight was short and uneventful.