My mother was Pennsylvania German, so I grew up eating a lot of traditional foods and following certain traditions. I've been happy to continue honoring one of those traditions, the eating of pork and sauerkraut on New Year's Day to bring good luck.

I also like to mix things up and try new recipes every year. This year, I decided to marry an Italian-style Porchetta with a traditional side of mashed potatoes and sauerkraut.

My porchetta recipe was based on a recipe in the most recent issue of Cook's Illustrated. In general I've had good luck with Cook's Illustrated recipes, although I often find them a bit fiddly. This was no exception. But I have enough experience that I don't hesitate to modify recipes as I see fit. In this case, I was extremely pleased with the result.

What follows is my interpretation.

The result was absolutely delicious. The pork was falling-apart tender, the flavor was incredible, and I ate way more than I should have. 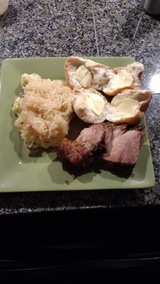