After getting up early yesterday, plus all of the walking in Xativa, we were wiped out. We made up for a bit by sleeping in today. Then, of course, we had breakfast at the hotel.

Today's plan started with La Ciutat de les Arts i les Ciencies. I realized on the walk to the metro station that I had forgotten my hat; Krista offered to go back and we really should have, since we were less than a block from the hotel, but I decided to press on. Not my smartest choice, but not exactly disastrous.

We took the metro from Aragon station to Maritim-Serreria, then walked down Carrer de la Serradora with one small detour to an ATM. This took us past Aqua Multiespacio again right to the City of Arts of Sciences (CAS from here on).

We walked past some of the really cool buildings on our way in.

We started with the aquarium. It had some really nice exhibits featuring pelicans, walruses, beluga whales, otters, etc. It also had aquatic birds and other animals that you wouldn't necessarily expect to see at an aquarium. The grounds were beautiful.

We also watched one of the dolphin shows. This was over my (mild) protests, as I'm not a fan of keeping dolphins in captivity, but overall it seemed decent there.

After leaving the aquarium, we walked by some more of the iconic buildings on our way to the Museu de les Ciencies.

We were hungry by this point (it was well into the afternoon), so our first stop was the cafe on the ground floor. Their menu was pretty limited but we both thought the carbonara pizza sounded good. It turned out it was absolutely delicious; a very solid choice on our part. (But honestly we got really good food pretty much everywhere we went in Spain.) I of course had a beer. Even by the standards of Spain the total bill was surprisingly cheap.

The museum itself was relatively lackluster. There were some cool exhibits but others that we found completely uninteresting. Some exhibits were closed. Everything was laid out weirdly (the building itself, while cool to look at, didn't seem particularly practical). A lot of the exhibits were heavy on text - but only in Spanish and Valencian.

On our way out we stopped at the gift shop. Krista bought a really cool pendant for her office.

Leaving the museum we walked through El Umbracle. This was gorgeous.

We then walked back to the hotel, again via Turia Garden.

Krista was absolutely wiped out by this point and I wasn't feeling too energetic myself so we just chilled in our room for a while.

We decided to go out for supper. I tried to retrace my steps from Wednesday's walk since I had walked by so many restaurants, but somehow tonight we couldn't find any. We were on the right street but it was much later in the day, so I assume most of the places were closed.

In any case, we ended up stopping at Barecito (a place which Google tells me is now permanently closed). The bartender told us we'd have to wait about 45 minutes to get food (until 8 PM), so we ordered drinks and hung out. It was a weird vibe - I'm not sure that the bartender was happy to have two tourists who spoke little Spanish in the bar - but there was nobody else inside so we decided to just wait it out.

He did come over with menus when it was a little before 8 so we ordered 3 items, thinking it was a tapas place. Instead we got three sandwiches, each of which was a good size. We (mostly I) managed to eat it all, but it was a lot of food. The sandwiches were: 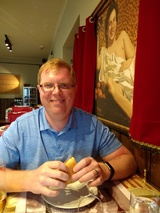 We headed right back to the hotel after this. Krista had recovered a little bit after eating, but she was still ready to call it a night and I wasn't going to argue.

I got a lot of sun on my face - without the hat it probably got more sun today than it had in years - but otherwise I was darkening up nicely (for a ginger, that is).

We were going on a wine tour tomorrow, so I did a little prep work tonight (making sure I had the tickets, etc.).