We were up early and went through our usual routine. We headed out, caught the subway to Valencia Nord again, and from there we got a train to Sagunto. By this point we were navigating mass transit like locals.

On the train, there was a newspaper laying on one of the seats. I picked it up and leafed through it - and was very surprised to see an article on Michigan in it. 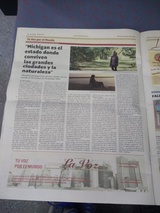 From the train station on the outskirts of town, we walked towards the town center. There we stopped at the tourism center and picked up a map. We wandered around a bit, enjoying the town, then entered a small museum.

From there we started to work our way uphill towards the old Roman theater and the castle. A lot of the original theater was still standing, but it had been repaired and modernized sufficiently for it to still be in use.

Krista's ankle was still bothering her and it was a pretty good climb up to the castle, so she decided to hang out near the theater while I proceeded to the castle. I left my phone with her so she'd have connectivity and I took her camera with me for photos.

The castle was huge. Almost all of it was accessible, and it was very cool. I took a ton of pictures for Krista, both of the castle itself and of the view.

I then walked back down and rejoined Krista. We headed to the Archeological Museum, which was small but nice.

We were both hungry by now, so we stopped at a very pleasant sidewalk cafe named Meson Casa Felipe on a small square, across from the museum. The food was good - we had a cheese plate with a couple different goat cheeses that even I liked, and I'm not generally a fan of goat cheese. I of course had a beer or two, and it was a very pleasant break. The entrance to the restaurant was actually about 75-100 feet uphill from where we were sitting - we were both wondering just how much exercise the waitress got in a day.

We wandered around a bit more but generally worked in the direction of the archaeological digs. Unfortunately they were closed for their siesta when we got there. We did manage to see some of the old Roman road on our walk back to the train station, though.